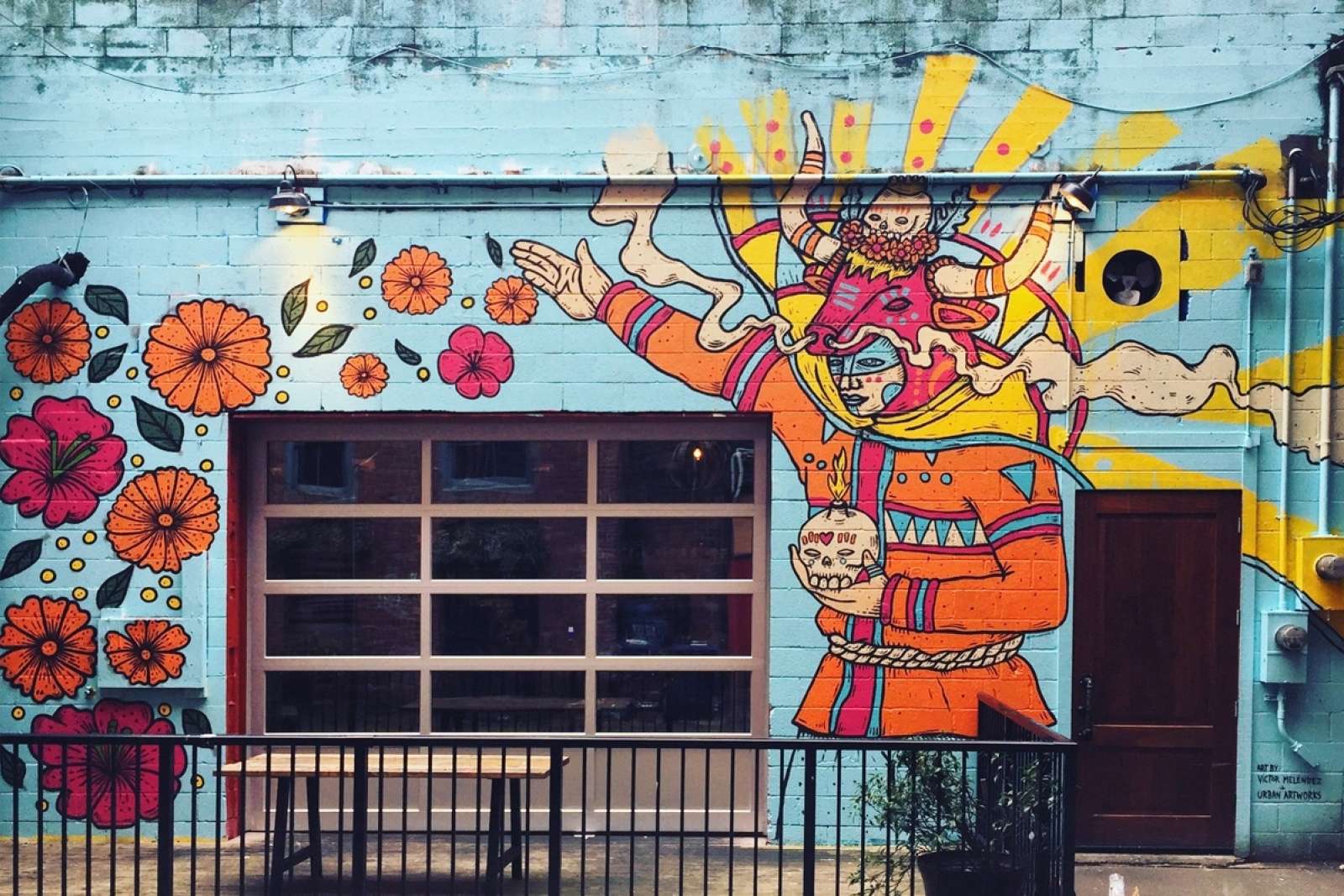 Drumroll, please! Belief Agency is thrilled to welcome our brand new art director to the team: Víctor Meléndez. If you haven’t met him, you probably already know him—his work is plastered all over Seattle and beyond, from the side of your favorite restaurant (Casco Antiguo, anyone?) to the sleeve of your seasonal bag of coffee beans. After nearly a decade at Starbucks doing everything from packaging to promotions, he’s taking the helm of our design team—and we couldn’t be happier. 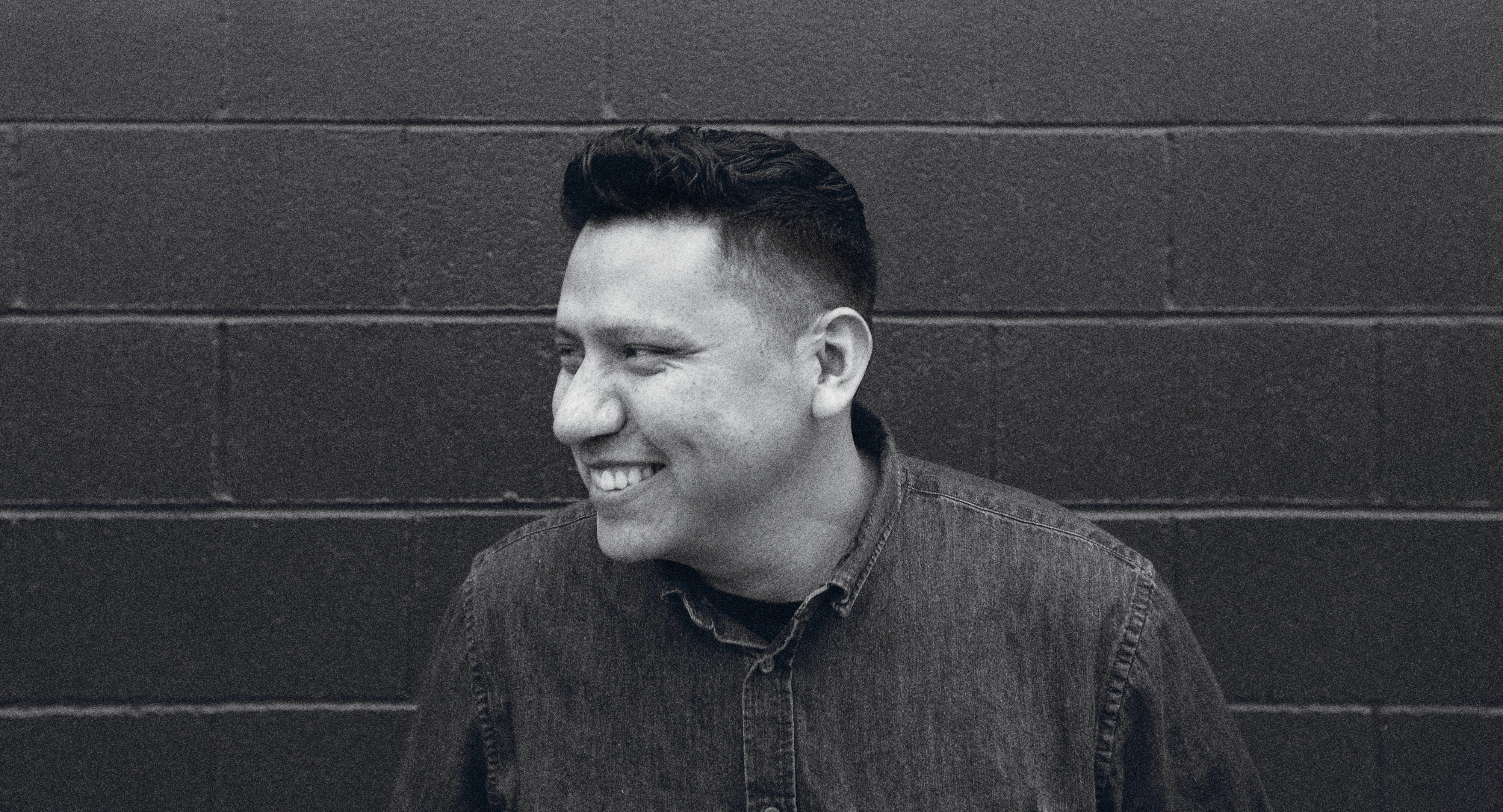 I was born in Mexico City. I grew up there and in a small town in the state of Veracruz called Minatitlán. My family is from the south of Mexico; some from Veracruz, and some from Oaxaca. A lot of people ask me what influences me when they see my work—Southern Mexico culture is a lot of it.

Were you always an art person?

No, no, no, no. I mean, I always liked to draw and I was always coloring and going to museums with my mom. I had an appreciation for murals and paintings and I liked making art, but my grades weren’t that good. In Mexico, you do an exam to get placed into certain schools. I tried to test out for the graphic design school, but my grades were just so bad. I got placed into what they call vocational schools, so I learned a trade—I was doing computer programming in what is equivalent to high school. My senior year, I did my mandatory internship at a museum because they had computers, and that happened to be in the graphic design department. It was mostly by mistake that I was introduced to the graphic design world. There, I learned how to screenprint and do poster work, and that’s when I got the bug.

You moved to the Seattle area after meeting your wife. What was it like to move to a new country at such a young age?

It was a big, big, big decision. I’m the oldest of the kids, and it was a big leap I was going to take. I didn’t speak English, so I came here as a tourist. When I came, I couldn’t work, but my visa had run out so I couldn’t really go back. I was in limbo. My now-wife got a job delivering the paper, so we’d go out at 2 a.m. to get the paper and load it into the car, then I’d drop her off to go back to sleep and I'd run the route and do the actual job. I did that for a few years, listening to the radio and keeping the paper to learn English. That, and I watched a lot of Seinfeld with closed captions. I didn’t speak Spanish to anyone, so I was kind of forced to get immersed in English and learn it.

When we got married, I got a working permit. I got my first real job at a casino—I was a buffet runner, changing the food. I was trying to learn English a little more; I was a bit better at that time. I also started community college and started taking English and college writing to get my AA. I’d go to class, then work a couple hours at the job I got at the community college, then work at the casino at night. I didn’t sleep—it was awful.

At that community college, I had a design teacher who encouraged me to share my portfolio at a portfolio day where I met a woman who was a teacher at Cornish—she encouraged me to apply. I got in and managed to get an internship at Starbucks my senior year, which started my career there.

Are there projects you’re particularly proud of?

One that I really liked was a collaboration with an organization called Has Heart. Has Heart is a nonprofit that pairs a veteran with a designer. Right now, they’re doing the entire country, going state to state—our pair was the first one in Washington State. We were together for a couple days—she told me her story, her struggles, and I tried to tell that story through design. In this case, it was an illustration that turned into a T-shirt, poster, and patches. The profits were then given to the veteran or an organization of their choosing. When you talk about veterans and military, I think you aren’t really aware of all they do. They put their lives in danger for all of us. This is a little bit of a way to give back to them, and I was really excited about doing that. I was really proud of this project. 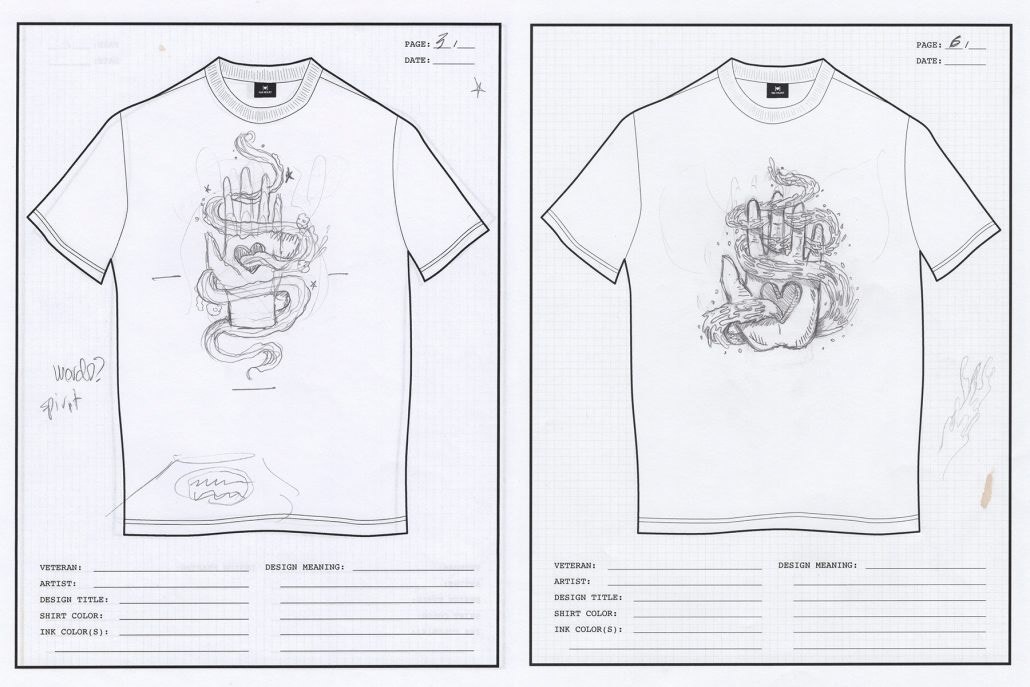 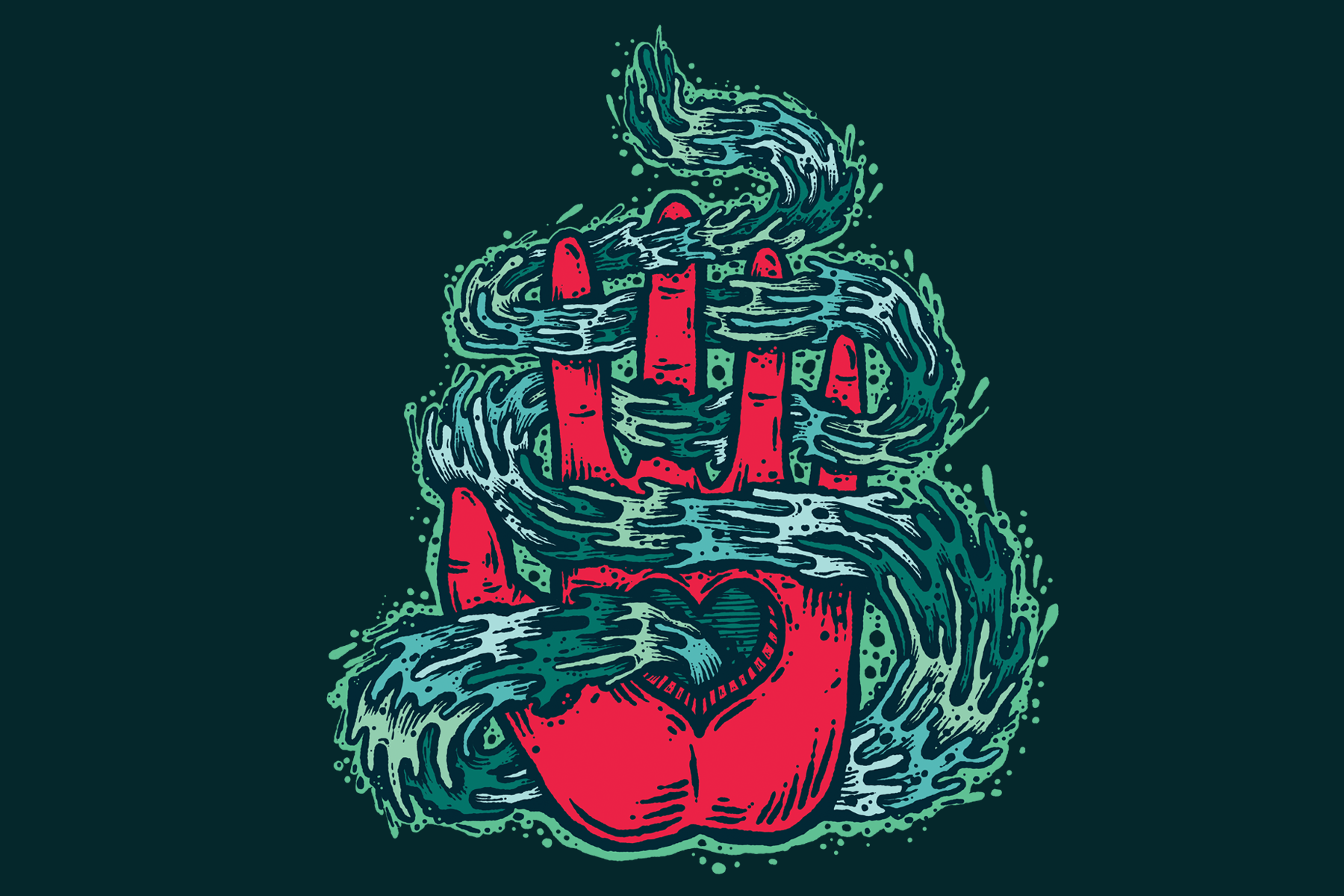 And every time there was a Mexico-related project at Starbucks, I always grabbed them. One that I really liked was when Starbucks turned 15 in Mexico. I got to do a tumbler and a card that was inspired by my grandma—she’s from Oaxaca and they were these super cool dresses, black with hand-embroidered flowers. I did a version of that and it was a great success. They ran out and my mom sent me pictures—I think she’s my biggest fan.

My murals stand out, too. When I was in high school, I was starting to tag and play with graffiti, but it was super shitty stuff—basic characters and things like that. I was really just trying to mimic other people and getting influenced by the culture at the time. I wasn’t a pro and stopped doing it until more recently. My friend and I just painted a mural at a new playground at Yesler. They rebuilt the park, put in a new soccer field and playground, and invited the community to give their feedback on the mural. We painted it with the help of some kids from the neighborhoods—we gave the kids a sketch, they painted it on the wall, and we helped them out with the final details.

What type of work do you most love to do?

Because I was at Starbucks for so long, the majority of my freelance is illustration-focused because that’s the type of work I like doing for fun. I love doing branding work and typography and stuff like that, but lately I’ve been doing a lot of illustration, mural work, and experimenting with new stuff like linoleum prints. I’ve also been doing workshops, teaching digital illustration.

What are you excited to bring to the team as art director?

When I was a lead designer at Starbucks, I really enjoyed mentoring younger designers. We would get a bunch of new people who were super, super talented. When I would see them, I’d be like, “Man, they’re so much better than when I started. They just need a little bit of guidance and encouragement and constructive criticism.” In a way, their success was my success. It was a way to give back in the way my mentors gave to me.

If you had asked me about being in a leadership position a few years ago, I’d have been like, “No, I don’t want to do that. I want to design.” I wasn’t into it. Then it kind of grew on me. I realized that I really do like helping others out and guiding them through in their careers. I see so much potential in others that sometimes they’re not aware of.

When I started at Starbucks, I didn’t do any illustration—I was kind of forced into it. When you start as an intern there, you work on big projects that are actually produced; it’s real work experience. When young designers would come to work at Starbucks, I’d try to force them into things they haven’t tried before design-wise. If they haven’t really done illustration or logo work, I’d push them into that direction. Obviously, if they really didn’t want to do it, I didn’t, but I was trying to exploit their talent and make them shine. I want to do that here.

What are you most excited about in your new role?

Belief Agency has a vision, and I’m excited about that. There’s a vibe and excitement that I’ve heard in the few meetings I’ve been in (so far) and in how people are talking about work and expectations that they have for the future. The place is cool, the people are cool—I thought it was a good fit.

At Starbucks, I did photo art direction and in-store and out-of-store campaigns, but it was mostly print and packaging. I’m excited to learn more about video production and the digital side—animations, voiceovers, stuff like that. I’m not familiar with it, but I’m very interested in it.

This is a new chapter for me and the agency, and I’m excited. I just want to create good work that resonates and connects with people, have good relationships with my coworkers, and kick ass, you know? I really want to contribute and make this a success. 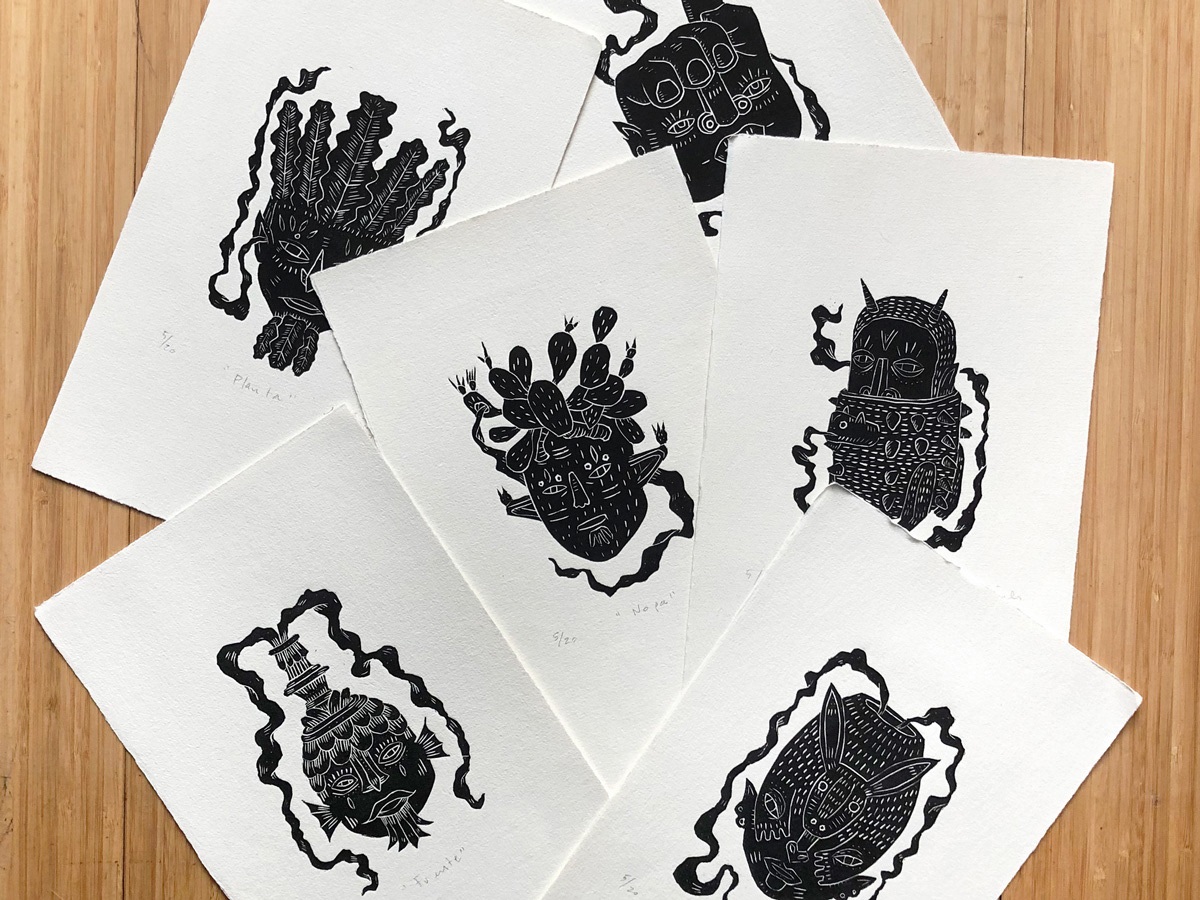