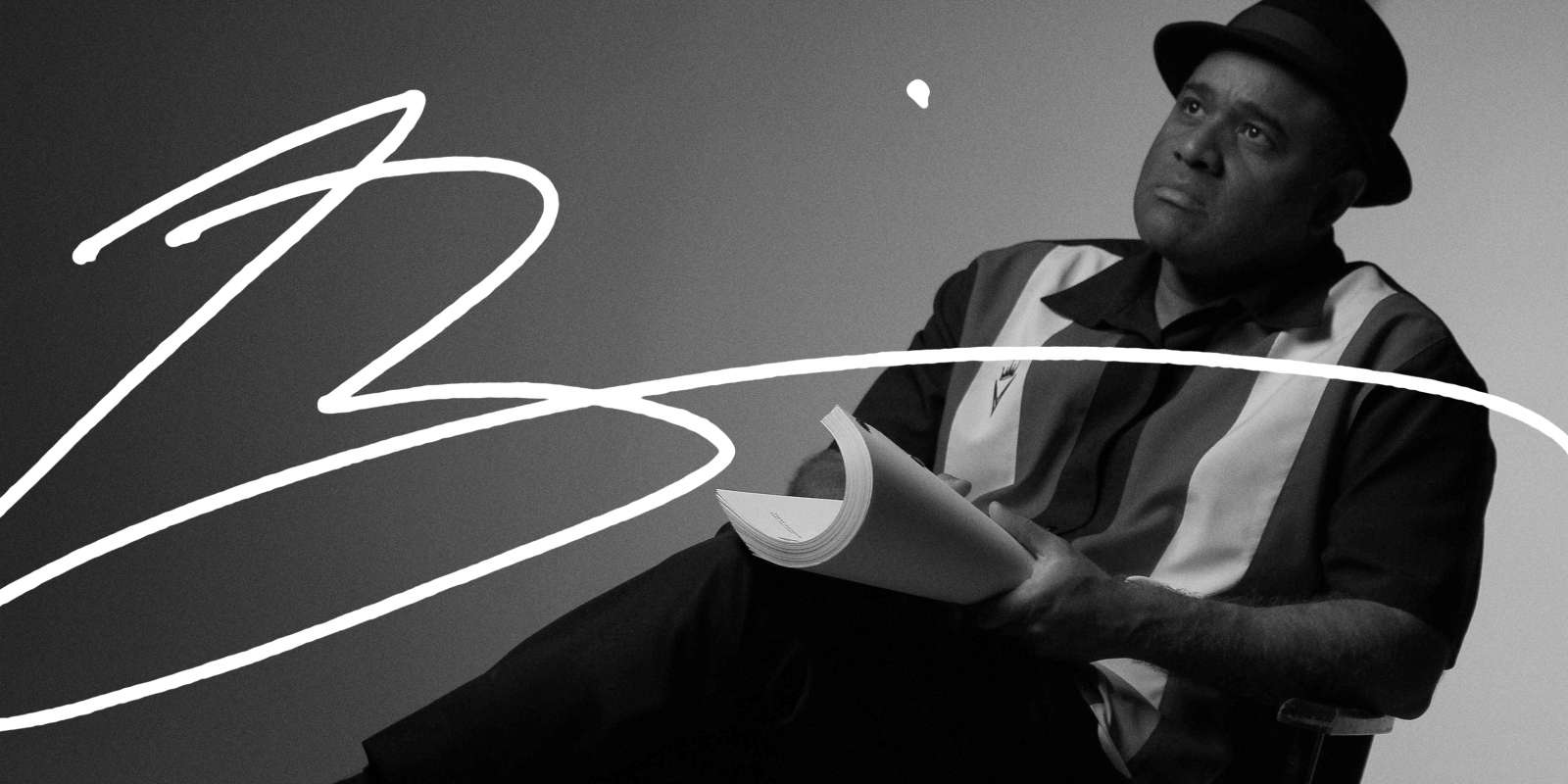 When Brian McDonald walked in on his first day of work at Belief Agency, we might have overwhelmed him a little bit with our praise.

You see, at Belief Agency (and beyond), Brian McDonald is somewhat of a legend. He’s our story guru. His teachings have been drilled into our brains, and we’ve drilled his teachings into our clients’ brains. A copy of his must-read book, Invisible Ink, is a staple on everyone’s desk, and if that weren’t enough, we turned his “Seven Easy Steps to a Better Story” outline into a poster so we could plaster it on our walls. At Belief Agency, if you don’t know what an armature is, you’re out. (Just kidding. Kind of.) Brian likens receiving the unabashed praise (which hasn’t stopped since that first day) to the same uncomfortable feeling of having a group of people sing “Happy Birthday” at you, and to that we respectfully say we get it, we’re sorry, and too damn bad.

Today, our new chief storyteller—the person who’s made us all better at our craft—is sharing his own stories of struggle and success and how he became the creative force he is today.

You’re a writer first and foremost. Is that what you set out to be?

No, I never wanted to be a writer. I always wanted to be a director—film chose me. Since before I can even remember, I was interested in making movies. I really loved the first Planet of the Apes from ‘68, and always thought, “I’ll make movies like that.” I grew up in Seattle in the 70s, when everybody was a writer/director. Francis Ford Coppola, George Lucas, Steven Spielberg—I thought that’s what you had to do, right? As a dyslexic, writing was frightening, so I wasn’t that into it. I was into stories, but writing—it took me a long time. Looking back, I think I was always a writer and just didn’t know it.

You followed the footsteps of your idols. How’d you get from being “into stories” to making them?

It’s a zig-zaggy path. When I was a kid, people of my age made a lot of Super 8 movies—my camera was ancient. It was from God-knows-when and belonged to my step-dad’s father, so I made 8mm movies with that. Before I had that, we didn’t have any money for a movie camera, so I made flip books incessantly. I probably did three or four of them a day for a long time, and that taught a lot about frames and how they work; about the importance or unimportance of each frame. Now, that’s intuitive.

I got my first job at 13. I was looking through the phone book for some reason and saw “motion pictures.” I didn’t know anybody made movies here in Seattle—I thought I’d have to go to L.A. for that. So I called up everybody who was under the “motion picture” listing, asked them what they did, and said, “Can I come see you?” I don’t remember anybody saying no. I talked to all these people who made films and commercials and who worked at animation houses. I went to one studio, and this guy really took a shine to me. He liked the way I talked about film, and said, “Well, you should come back more often.” So I would go after school to hang out and help him—we’d work on commercials—and then one day he called me and says “Hey, I’d like to offer you a job,” to which I was like, You’re going to pay me to come in? I did that from the time I was 13 until I was 19. He eventually left to run the animation department at George Lucas’ Industrial Light & Magic. Then I moved to L.A., and that… was educational.

I got to a point where I just couldn’t make things work there. My car broke down, and I couldn’t make a living without a car, so I was getting more and more broke. I also found that I was trying to chase the money. The longer I was down there writing screenplays and trying to break in, the more I found by the time some nobody like me heard something like Universal’s looking for Westerns, Universal already had 100 Westerns on their desk. I wasn’t telling the stories I wanted to tell or was interested in. I was chasing the money, and the broker I got, the more desperate I got, so I decided to move back to Seattle. I needed to remember who I was as a creative person.

Being away from that environment worked out better for me—I got more work. When I moved back up here and started making movies, I started getting attention and doing speaking engagements and wrote Invisible Ink and a few comic books. It’s been a long road, but everything happened after I left L.A.

It sounds like staying true to who you were as a creative paid off.

It paid off slowly. I would say that my biggest issue is that I sometimes don’t recognize the great things that have happened to me because I’ve had my eyes on a different prize. HBO, Slamdance, winning the Austin Film Festival—those were all big deals, but I thought all those things would change things and put me on a path they didn’t put me on. And the truth of the matter is, if you’re a minority, those doors to a different prize are harder to open.

The film industry is overwhelmingly white and male. What advice to you have for people of color or for people from other marginalized communities who are interested in breaking into the field?

My advice is that when you ask for advice, you find somebody who most matches you. I used to take advice from my friends—I have a ton of white friends—but that advice wasn’t good for me. They’d say, “You should be persistent,” but I found that when I did that, people found it “aggressive.” You come in a certain body, and that gives you certain advantages and disadvantages. Sometimes you’re completely unaware, particularly of any advantage you have coming in that body. I couldn’t do things my white friends could do, and it took me a few years to go, “I have to stop taking advice from white guys.” My advice is to get advice from somebody who looks like you. There’s a shorthand, and you don’t have to explain the reality of your reality.

You eventually opened the door to Pixar, which is quite the accomplishment. What’s the story there?

It was kind of a windy road. A friend I’ve known for a long time is now at Pixar, and he’s been a tireless champion for me over there. Derek wanted to read Invisible Ink—it was just a manuscript, and I couldn’t get it published. I emailed it to him, he printed it out, read it, liked it, and goes, “I’d like to show this to Andrew Stanton.” Now, I was a big Andrew Stanton fan because I loved Finding Nemo, so when he says, “Do you mind if I show this to Andrew,” I’m like: “What? Are you kidding me? Yeah, yeah, go ahead, show it to him.”

So he put it in his mailbox there at work, and that was all I knew until I got an email from Andrew saying they’d just had a screening of the animatic for his new film, WALL-E. It didn’t go well. He said: “I was going to go away for the weekend to work on it, try to figure out what the problem was, and I saw your manuscript in my mailbox. I grabbed it, and I thought maybe I'd flip through it. I just sat and read it in one sitting. It totally opened the world up and made things make sense." Then he said something about how I should maybe come down to Pixar to teach at Pixar University.

The first time I did a six-week class for them, they flew me down every week on Wednesdays, and Andrew sat in on all my classes. That led to more lecturing over several years, and now, a particular director might like me and say, “I want Brian to help me break this story,” so I’ll go down and do that. That Andrew thing was one of my big breaks because that did change things, you know? It matters when you say you’ve worked at Pixar, right?

They’re the collective wisdom of everybody who’s ever lived. Somebody who lived a thousand years ago has something to tell you about being alive. The oldest story we have written down is the Epic of Gilgamesh. In that story, Gilgamesh’s best friend dies, and he realizes he’ll die too one day. He goes on this journey to discover how not to die, and what he finds out is that you’re going to die and you get stiffed trying to figure out how you’re not going to die, so you should enjoy the small things in life. That story is 3,500 years old, and yet the same things you should have paid attention to then are the same things you should pay attention to now. Stories have a lot to teach you, and they’re all about living and living well.

So, why do you do what you do?

I write and teach because on some level, I’m supposed to. A woman in my first class said to me, “You should write a book.” I said, “I hear that a lot.” She looked me in the eye and she goes, “No, no. You have a responsibility to write a book. You’re really good at this.” There are people I wish had written things down and didn’t. I wish there was more Paddy Chayefsky and Rod Serling stuff I could read. For some reason, I’m thinking a lot about legacy at this stage. I’m thinking about people who aren’t born yet and what I have to say to them, and that’s true both in my teaching and in my life. “What do I have to say to people? What do I have to say to people who aren’t here yet? How can I do something that resonates like Gilgamesh resonates? Something that, if I’m lucky, matters to the next generation and the generation after that?” If I can do that—say something that matters to one generation—that’s pretty big. That’s why I do it.