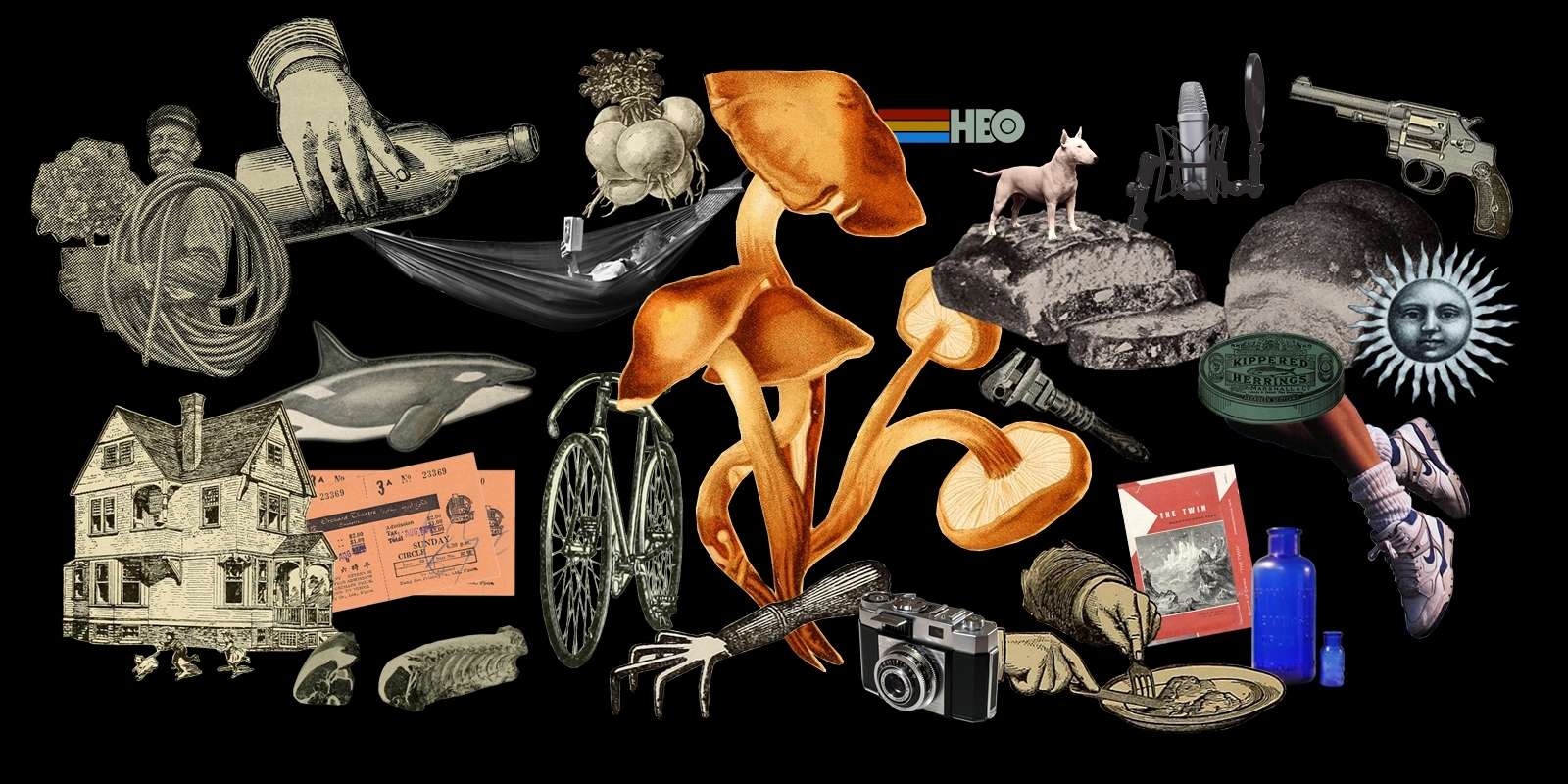 From Korean dramas to the long-awaited return of Andrew Luck (yeah, we’ve got a Colts fan), here’s everything the humans of Belief Agency are currently obsessed with.

Jesse Bryan, executive creative director: Working in the yard and trying to figure out how to garden. So much of our work at Belief Agency is around thinking, and nothing ever feels quite done. The idea that you can see a problem like a huge blackberry bush and do something about it is gratifying, and there’s just something about working with your hands in the dirt.

Heather Croteau, copy director: After six years of living in Seattle and seeing orcas everywhere (as school mascots, on signs, sculpted out of driftwood), I finally saw them close-up, in the wild, for the first time this summer. It was magic. I’m obsessed—like, my “recently watched” list on Netflix is basically all documentaries about killer whales and I turned on local alerts from the Orca Network. Obsessed.

Ryan Clark, art director: Very into sportswear in general lately. In the past two months or so, I’ve bought five pairs of Adidas sneakers and four pairs of Nikes. Next up is TEVA’s Ember Lace boot. Also into Ray-Bans, the color cream, and vintage skate decks.

Hannah Gilman, senior copywriter: Sharp Objects on HBO. I’m usually all about reading the book before the adaptation, but I didn’t read this one by Gillian Flynn and to be honest, I’m kind of glad I didn’t because the experience of watching it was… wow. It’s a dark, twisty, complex, thrilling, slow-burning mini-series that held my anxiety at an unhealthy all-time high the entire way through. The finale gave me chills and sent me into a no-sleep internet black hole, and now I want everyone else to watch it so we can dissect the whole thing together.

Brian McDonald, chief storyteller: I try to take a good picture every day. I want to learn how to see a picture no matter where I am or what’s going on. Some subjects and environments don’t lend themselves to a photo, and that’s what I look for—I like the challenge.

Rachelle Cummings, creative director: Rosé all day! I lived in the South of France—which is prime rosé country—10 years ago. Since then, I’ve developed a love for rosé (even if it’s trendy). This summer, a few friends and I met up once a week and worked our way through a selection of rosés. I’ve discovered I prefer dry rosé, which means it’s crisp and not as sweet. The easiest way I’ve found to identify the ones I like is color—I prefer ones that are lighter and peachier. I go for French rosés when I get the chance (my favorite will forever and always be AIX, which is from the town I lived in), but I’ve found some lovely Washington ones.

Cali Pitchel Schmidt, creative director: Very Cavallari, because… Kristin Cavallari. It’s everything you want it to be. Also, looking at art to buy on Artsy. It’s a dangerous app, but I’m obsessed. Also, skin-contact wine. It’s so hot in L.A. right now. And I’m very into tinned fish. Get a crusty loaf of bread from Sea Wolf Bakers (so good), buy tinned fish from the French and Spanish store down at Pike Place, add butter and dijon mustard, and call it a meal. You’ll feel fancy AF.

Ian Ebright, publishing manager: The HBO show Succession. It’s really well-written and specifically told, and I couldn’t help but think about all the research they had to do to nail the characters and situations that so few of us have access to (the show follows a wealthy media conglomerate family’s internal power plays). And the cast is pitch-perfect. Yay!

Hannah Lofgren, director of production: One of my biggest secrets is that I’m obsessed with Big Brother. I’ve been watching it every summer since I was 10 years old, no joke. It’s amazing—think trashy TV drama but with very strategic gameplay. It’s kind of like if The Real World had a baby with Survivor. Also, kombucha. And rose-water spray.

Oleg Masnyy, designer: MoviePass and whether or not it’ll die in the coming days. In the dark days, I would pick and choose which movie was worth spending money on. Now, I can go to a movie without a single clue what it’s about. In most cases, I think that makes the experience better—because I don’t have any expectations the movie is bound to fall short of. Please don’t die, MoviePass. I know we’re robbing you and there’s no way your business model can be sustainable, but please don’t ever change.

Marcus Hackler, managing director: Cycling. I’m swapping the car commute for the bike and commuter train to improve my health, reduce stress, and be more mindful of my personal impact on the environment.

Matt Naylor, senior designer: The Joe Rogan Experience podcast. I like Joe because he’s intellectually curious about a wide array of subjects and interviews people from all walks of life and professions. One episode he’s talking to a journalist who was kidnapped by Somali pirates for two-and-a-half years, the next he’s talking to Macaulay Culkin. The range of people you get to hear from on his show spans astrophysicists, comedians, biologists, political commentators, musicians, athletes, sleep specialists, nutritionists, celebrities, and journalists.

Keelan Hooper, project manager: Cooking. I find something I want to cook, then make it over and over again, tweaking things until I’m happy with it. Then I find something else, and maybe never cook that first thing again. The process is relaxing, and it produces something I enjoy—food—but it also has clear inputs and outputs, and the decisions you make impact the quality at the end. It feels like a science experiment. The best I’ve been working on the longest is roast chicken—it’s literally been years.

Joe Gannon, account manager: Etiquette. I’m fascinated with learning how to step-up my game socially, professionally, and personally. Awesome Etiquette is a great podcast. Also, trying something new every month—I grew up a very frightened and worried child, so I’m trying to step out of my comfort zone. And my wife, simply because she’s awesome.

Wesley Anderson, designer: Listening to rap in different languages. It’s good background stuff. I can zone in on my work and not really listen because it sounds like gibberish to me. I like African rap, Eastern European Rap, Scandinavian rap, some Arabic stuff. I have a playlist that I constantly add stuff to.

Nathan Shain, filmmaker: Right now, my hammock (that I got in Guatemala) on the weekends is pretty nice. It’s cool in the backyard. I like to sit there and try to read a book—I usually get interrupted, like, four minutes in by one of my kids.

Dave Powell, digital marketing manager: Finding a place to live in Seattle (I’m on Zillow all the time), Andrew Luck (he’s making a long-awaited return after his injury), and increasing mileage for long-distance running—I need to shed some beer weight.

Sydney Conrad, digital marketing specialist: My new D3400 Nikon camera. I’ll be traveling a lot over the next few months and want to be able to capture all of it in photographs that look better than my phone pics, so I’m totally wasting all my time on YouTube learning about photography because I’m not a photographer. And graham crackers—they’re a daily snack.

Andy Maier, post-production supervisor: Gojira, this metal band from France. I listened to pretty soft stuff growing up, until I heard Master of Puppets by Metallica. I listened to the entire metal world, became a metal drummer, then slowly forgot about it. Fourteen years later, a friend showed me Gojira’s album Magma, and the flame was re-ignited. Now, me and my friends have a studio, a band called Opponent, and we’re putting the finishing touches on our own EP, Trial by Fire. Because of Gojira, I’m doing something I’d forgotten I loved this much.

Michelle Henley, associate filmmaker: I’ve had “Humaniora” by Sound of Ceres on repeat.

Sarah Xanthakis, designer: The My Favorite Murder podcast—there’s something about the storytelling aspect and learning about so many different killers. I listen when I run or work.

Steven Stevenson, web developer: Home automation, spreadsheets and graphs on my utility consumption, optimizing water schedules for plants, organizing the kitchen—pretty much everything house-related. I’m focused on things that run without me doing anything before the baby arrives.

Jenna Shin, project coordinator: Bull terriers. I follow more of them on Instagram than I should. I randomly started following Marc Jacobs’ dog Neville and fell in love—it’s just pictures of his ridiculous face in turtlenecks. You should follow him.

Grant Kirkpatrick, animator: Mushroom hunting! I like hunting for chanterelles—it’s a good excuse to walk around in nature, and you get to find free food while you do it. It involves a lot of examination, but it’s peaceful.

Joel Cummings, director of strategy: I’ve been trying to perfect a rib recipe this summer. The reception has been good so far, but, funny enough, I always forget one aspect of it. One time, I forgot to put the sauce on.